Should You Avoid Public Bathrooms Because of Coronavirus?

It's probably not safe to answer the call of nature outside of your own home.

Should we avoid public bathrooms during the coronavirus pandemic? Absolutely, and we'll explain why. If you must go, though, here are also some ways to protect yourself and others.

Just when we think things might start going back to normal, coronavirus throws us another curveball. Many areas of our daily lives are going to need some MAJOR alteration if we’re going to stay safe – and keep others safe – during this pandemic. Our bathroom usage is no exception. So, when we’re slowly going back out into the world, and we find ourselves needing to answer the question: Do we need to avoid public bathrooms because of coronavirus?

Should we Dodge the Public Restroom?

In short, yes. Keep away from public restrooms as much as possible, because no matter which way you look at it, they’re a fantastic place for a virus to spread. However, we don’t always have the option of waiting until we get home. In that case, there are a few steps you can take to at least try to lessen the spread of the virus. 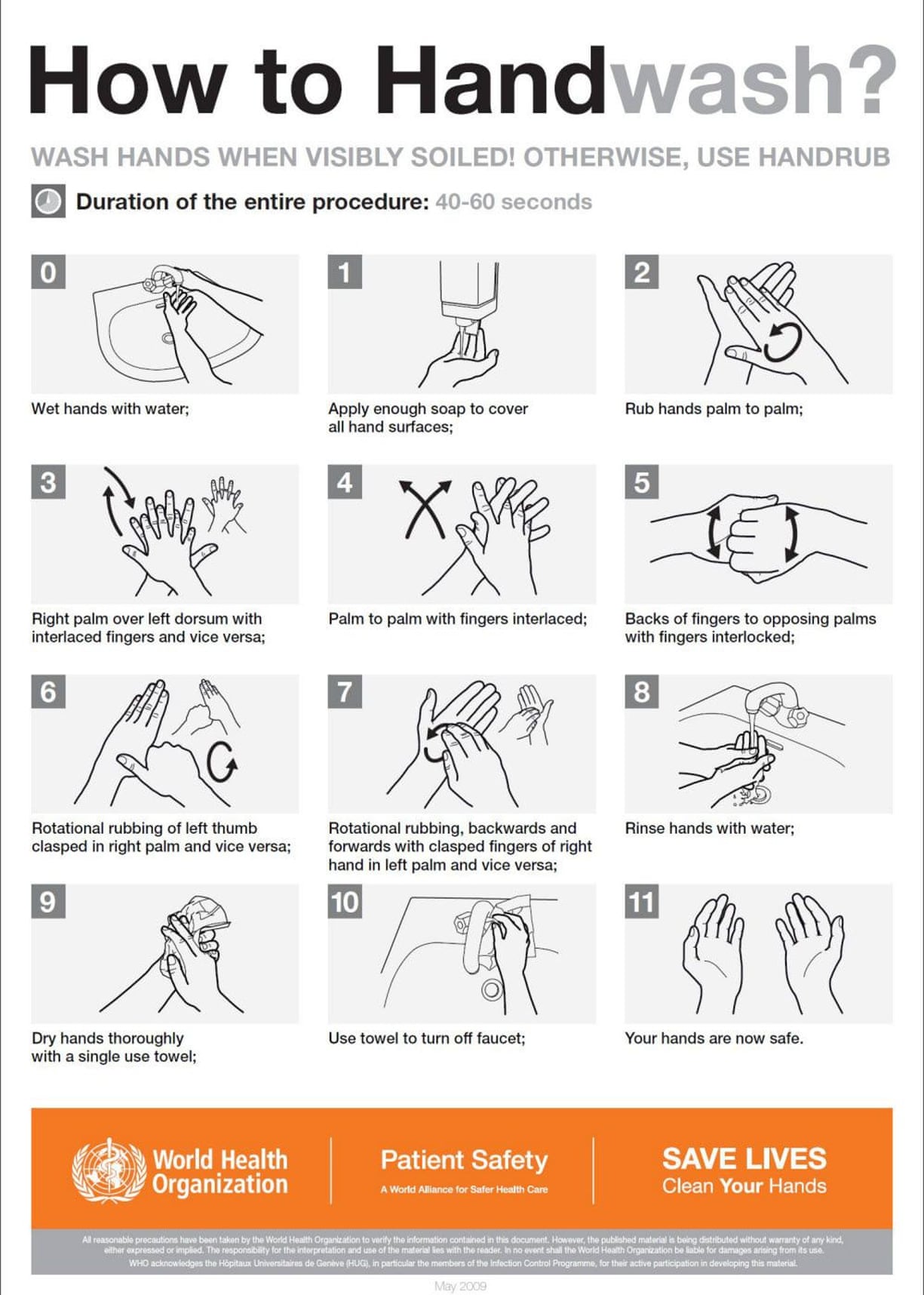 How to Hand Wash. Graphic by the World Health Organisation

The World Health Organisation has long advocated for the use of alcohol based sanitisers over soap and water to clean your hands unless they’re “visibly soiled”. When that’s not possible, though, they recommend closing the faucet with a towel, rather than by touching it with your hand directly.

In fact, touching ANY surface in a public restroom is now a no-go. Peter Collignon, a professor of infectious diseases and microbiology at the Australian National University told the Guardian that doors and taps are going to be particularly problematic.

“The major way coronavirus is transmitted is via respiratory droplets,” he said, “so you can catch it off surfaces that your hands touch … There are other ways, it can even carry in faeces too. About 60% of patients show that,”

“We need to have public bathrooms open up as lockdowns ease, but the more non-touch we have the better.”

By non-touch he means self-cleaning, auto-flush toilets, and doors and faucets that make use of sensors. Many of these are already common in newer buildings, but are far from ubiquitous. While this will probably be something that becomes more and more prevalent in bathroom design going forward, it’s not going to change the public bathrooms that have already been built with door handles and faucets.

So how can we protect ourselves and others?

Public bathrooms are not going to feel like safe spaces for a while. On top of the threat of respiratory droplet transmission that we’re already dealing with, the chances of fecal-oral transmission becomes extremely high in these spaces. Gross, but true.  Alexandra Sternlicht at Forbes compiled a list of steps we can take in order to make our visit to that now threatening space a little safer for everyone. These steps include:

Flush with the lid down.

Photo by Hafidz Alifuddin from Pexels

If you didn’t know it already, poop spreads coronavirus too. In fact, studies have shown that coronavirus can remain in human waste for a whole month after a patient has recovered and that “viral shedding from the digestive system can last longer than shedding from the respiratory tract”.

Because of something called “toilet plume” flushing with the lid open allows particles to become airborne and settle on surfaces, like the taps and doorhandles, near the toilet. However, Collignon says that 80% of viral particles that escape from feces into the air can be contained just by flushing with the toilet lid down.

This one is tricky because, as we’ve mentioned, we don’t want to be touching ANYTHING in the bathroom, never mind the toilet itself. It’s an even bigger problem in restrooms that don’t have lids on the toilets at all.  Unless you’re in a very modern bathroom with a completely automated toilet, this is one battle that’s not very easy to win.

Sanitise AFTER leaving the bathroom.

Collignon recommends using a sanitising hand run after leaving the bathroom, once you no longer have to touch any surfaces. This should be done in addition to washing your hands in the bathroom, not in place of it.

Wait a little between users.

Qingyan Chen, a Purdue University engineering professor who studies disease spread, told Forbes that public restrooms really should be avoided altogether where possible. If you have to use one, Chen recommends waiting two minutes between users.

Since virus particles can hang around in the air for up to eight minutes after someone has merely spoken, the longer you can wait to go after somebody else has, the better.

This is going to be an exercise in patience, particularly when there are lines involved. Hopefully those lines will also be practicing sufficient social distancing measures too.

Photo by Markus Spiske from Pexels

In summary, you don’t want to use public bathrooms right now. If you can avoid them at all, do so. If you absolutely can’t avoid public bathrooms, be mindful of the surfaces you touch and keep your mask on at all times. I’m sure by now this doesn’t even need to be mentioned, but wash your hands properly. Be respectful of the people who will have to use that bathroom after you, and remember the fact that a lot of people have used it before you.

If nothing else, this pandemic is an indicator of the fact that public spaces need to be designed with hygiene in mind going forwards, and that we’ll need to behave in ways that keep each other protected too.

Calm Before The Storm: Why Are South African Hospitals So Quiet?
On a Scale From 1-10, How Sick Are You of Zoom?
WHO Suspends Testing For Trump-Endorsed COVID-19 Drug